Interactive exhibition on our solar system “Planets In Your Hand”

The science communication team “Planets In Your Hand” of NKUA invites all visitors to touch the planetary surfaces and travel virtually in our Solar System. Familiarize yourself with the characteristics of the planets, as well as the atmospheric and geological conditions that prevail on them, such as the temperature and the wind. Learn about the latest space exploration missions through an interactive and enjoyable way from experts in the field of Astrophysics.

Meet our planetary neighborhood by playing. Answer questions about the planets of our solar system and discuss with the “Planets In Your Hand” team members about their characteristics and scientific exploration. See the night sky through a telescope, observe the lunar surface’s characteristics and meet the constellations we see during the summer in Greece.

What will the participants of the event gain:

Fascinating narratives about the universe by Kosmas Gazeas

Possibility of direct contact with Astronomy and Astrophysics, something that has been lost from the curriculum of schools of all levels of education.

Dr. Kosmas Gazeas was born in Kastoria, Greece. He studied Physics at the Aristotelion University of Thessaloniki (AUTH) and he got his MSc and PhD degree in Observational Astrophysics from the National and Kapodistrian University of Athens (UOA).

His post-doctoral research in astrophysics was conducted at Harvard-Smithsonian Center for Astrophysics (CfA), USA, where he worked with images taken from Hubble Space Telescope (NASA). He worked at the European Space Agency - ESA, Netherlands where he specialized in space technology and optics. Since 2012 he act as an ESA scientific consultant in projects related to space optics.

In parallel to his research activity, his passion about space exploration led him to participate at the Astronaut Selection Process at ESA in 2008. He managed to be shortlisted among the top 500 candidates in the world.

Today Dr. Gazeas is a Lecturer of Observational Astrophysics at Physics Department (UOA). His educational and research work is focused in astronomical study of eclipsing binary stars, supernovae, blazars, black holes and other exotic objects in our Universe, while we works in parallel with asteroseismology, on various space technology topics, applied optics and astronomical instrumentation.

His rich research work is reflected on a large number of research and academic assignments on various astronomical subjects, while his interest in public outreach led him to get involved with science communication. During the past years he gave numerous talks in schools, universities and other institutes, while he is an active organizing member in Athens Science Festival. 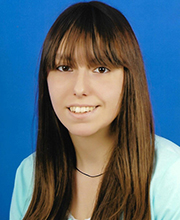 Konstantina Vrontaki is a master student in Astrophysics, National and Kapodistrian University of Athens

Maria Panagopoulou is a master student in Education, National and Kapodistrian University of Athens

What is the program ‘Planets In Your Hand’
The program ‘Planets In Your Hand’ consists of a portable exhibition of models of planetary surfaces in wooden rectangular frames. The idea of ​​the exhibition arose in 2017, when in the framework of the competition Europlanet Funding Scheme 2017, a proposal was submitted by a group of students of the Department of Physics of NKUA to the European planetary network Europlanet. The report of the program presents the surfaces of the 8 planets of the Solar System, highlighting their basic characteristics: temperature, lighting, wind and solid landscape on terrestrial planets. The exhibition was designed and constructed with the aim of disseminating knowledge around the field of planetary exploration, giving the opportunity even to visually impaired people to visit the exhibition and touch the surfaces in a unique interactive experience. The exhibition is aimed at families with children, young people, adults and organized classes from schools and educational institutions. It is accessible to people with disabilities and visual impairments, who may not have had the opportunity to become acquainted with the planets of our Solar System and planetary science in general.