The Megisti Puzzle Museum, the first in Greece, has the largest collection of puzzles in Greece and one of the largest in the world. It was founded by mathematician Pantazis Houlis and has 4200 exhibits, many of which are his own inventions and constructions.

It operates in winter/summer and has positively amaze visitors of all ages, as well as a large number of Greek and foreign distinguished visitors who come to the island exclusively for the Puzzle Museum. Although there are only four other Puzzle Museums in other countries (covering all kinds of puzzles), the one in Kastellorizo is the only interactive one.

Kastellorizo has a long tradition in puzzles, which is evidenced (1) by magazines with 19th century puzzles that exist in the Folklore Museum of the island, (2) by the existence of countless riddles in the form of a poem in the newspaper Kastelloriziaka Nea of the 60s, and (3) the regular representation of Greece in the International Puzzle Organization by two multi-award-winning Greeks, both originating from Kastellorizo.

In general, Greece has a historically proven tradition of puzzles, with Archimedes’ Ostomachion being humanity’s first three-dimensional puzzle, the Riddle of the Sphinx being one of the first verbal puzzles, while the Labyrinth, Pandora’s Box and the Gordian Knot are often used as names for today’s puzzles.

Since October 2020, the Megisti Puzzle Museum has been declared as the European Centre for Science, Technology and Art (STARTS). Links to the project that is done in collaboration with STARTS may be found below:

THE GRIFFON MUSEUM IS EVOLVING

After two years with visitors looking for puzzles to buy as a memento, the Puzzle Museum from May 2022 has now many puzzles (in the past, there were none for sale).

And despite the fact that the Puzzle Museum has a monopoly (the only one in Greece and one of the few worldwide that cover the entire range of puzzles), the prices are clearly below similar museums and escape rooms, while we plan to combine it with the existence of an escape room in the future (estimated time: two years).

In 2022 there will be about twenty puzzle buying options. The existence of an e-shop is possible, but nothing replaces an interactive sale with physical presence.

As regular members of the International Puzzle Party, we will always be the first to present (at least in Greece) the new educational games (those that are available, but also those that are not available on the market), and we invite you to this wonderful world, for young and old.

The Puzzle Museum is a huge private investment on the island of our heart. While those who dare to come in the winter, the visit will always be richer in time and in themes. We always remain dedicated to the brave Greeks, to our fellow citizens and to the Santrapeia School, with whom we spend the difficult winters together.

There is no timetable for visiting the Puzzle Museum; the tour/presentation is by appointment for a specified time. Ideally, groups should come with 4 people (minimum number) up to 10 people (maximum number).

Links to the project that is done in collaboration with STARTS may be found below:
Google maps: Megisti Puzzle Museum
Tripadvisor: Megisti Puzzle_Museum-Kastellorizo_Dodecanese_South_Aegean
Facebook: Pantazis Constantine Houlis

After the organization of the 1st Puzzle Festival, its founder Pantazis Houlis was invited and gave a series of lectures presenting the puzzles and their history, inspiring the undivided interest of young and old. They spent special and creative moments playing and solving the puzzles. This proves that Kastellorizo can export its own culture! 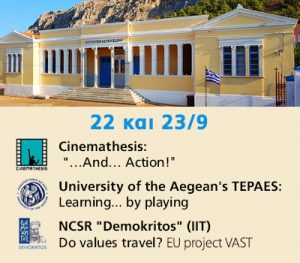