Workshop of Musical – Theatrical Play by Fotini Baxevani and construction of Shadow Theatre & Figures for Karagiozis by Christos Stanisis.

Being inspired, creating a story of your own and expressing it through the magical world of theatre and music, could it be a… puzzle? But it’s also a game! And if it seems like a brain teaser in the workshop, we will reveal the solution that frees up the imagination and expresses every emotion, every idea and meaning.

A few words about the importance of the workshop:

The theatrical game is a creative game!!! Through the fun nature of the lesson, it acts as a means of animation and expression even for the most shy or lively children. Let’s not forget that play is the first initiation of children into art.

What does theatrical play offer to a child?

Acquaintance with the history of shadow theatre and its heroes. Construction of figures and stage for Karagiozis, lesson in figure animation (kinesiology, voice) and performance of a play.

Wednesday- Thursday before the festival will be preceded by a workshop (2-3 hours / day)
Friday- Saturday for 3 hours.
Sunday is the show day. Those who have attended the workshop will also participate.

At the end of the workshops, the participants will present the work they have written and will interpret it themselves with their own figures on the stage we will build.

“Kastellorizo is the place of my heart, and through it these two songs were written to bring this beloved island to all the hearts of the world.

The strength of soul and patience that the Kastellorizians have shown throughout the long history of this place is remarkable and unique.

ALL REVENUES FROM THE SONGS will be donated to the music and theatrical education of the children of the island through the association EN.I.G.MA (Union of Ideas, Puzzles & Mathematics) of Kastellorizo, but also for the recording and preservation of stories and traditions of the island.

It is my own small but heartfelt contribution as a minimal tribute.

For those who are interested in financially supporting this effort, they can do so in this account:
https://paypal.me/pools/campaign/114506993505262195

Or buying the songs here:

A big thank you to everyone!”

*The songs are from the performance “The Lady of Ro” by Giannis Skaragas, directed by Stavros Litinas and with Fotini Baxevani in the title role.

The work is based on the novel of the same name by the award-winning Yannis Skaraga (Kritiki publications https://kritiki.gr/product/i-kyra-tis-rw/) and since 2017 it has been presented in different performances throughout Greece, as well as in Cyprus, the USA and Australia.

Information in relation to the show: 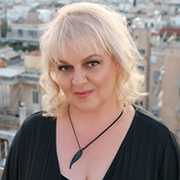 Graduate with distinction of the Drama School of the National Theatre of Greece. Musical studies at the National Conservatory and the F. Nakas Conservatory (piano, singing, orchestration, composition for theatre and cinema). Worked professionally from 1992 until today and she participated in the theatre in over seventy performances as an actor, composer and director. She has played in many well-known TV series and films and has signed the original music of films and serials.

In 2013-14 she served as Deputy Artistic Director of the National Theatre of Greece.

She has taught acting in the drama schools of the KTHBE, the National Theatre of Greece, etc., as well as in therapeutic communities of KETHEA and theatrical play for children. In 2008 she founded the record company "faos-music" with the aim of publishing original music for theater, cinema and jazz. In 2009 she directed G. Scarragkas' Prime Numbers in New York (nominated for the N.Y. off-off Broadway Awards). In 2011 she was awarded for her performance in the role of Loxandra in the play of KTHBE by the Association of Greek Theatre Critics. In 2017 at the Short Film Festival of Drama, she received an award for best female performance for the film "Urania".

She is the first Greek speaker of UCLA Regents' Lecture at the invitation of the UCLA Stavros Niarchos Foundation Center for the Study of Hellenic Culture in January 2020. The subject of the lecture was Kastellorizo, titled "My own private Kastellorizo".

From 2017 until today with the monologue of Giannis Scaragas "The Lady of Ro", she has given performances all over Greece, Cyprus, Australia and America with great success.

"The Lady of Ro" is the first Greek theatrical production to receive an official invitation from UCLA's prestigious Center for the Art of Performance in Los Angeles, and was presented in February 2020 for two performances.

The songs "Kastellorizo mou" & "Erimopouli (for the Lady of Ro)" were written for the play "The Lady of Ro" by Giannis Scaragas, directed by Stavros Litina and with Fotini Baxevani in the homonymous role.

A work written especially for Kastellorizo and the Puzzle Museum where Karagiozis meets Lambros Katsonis, the Lady of Ro and more!

Whoever captain or passerby from the island can solve the riddle of ’21 will win 1000 gold coins.

But if his ship doesn’t solve it, he will lose.

Who will be able to solve the riddle of ’21 in Kastellorizo?

Is it the shipowner Sior Dionysios?

Could it be Captain Manousos, the Cretan?

Or maybe Stavrakis the sailor of Syros? 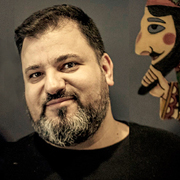 He was born in Thessaloniki. He learned the art of shadow theatre from Eugene Spatharis.

Since 1993 he has been performing in Greece and abroad. In schools (kindergartens, kindergartens, elementary schools, gymnasiums), in events of municipalities and cultural associations, in theaters, in music stages (Thessaloniki Mill, Glass musical theatre, etc.) at the Thessaloniki Concert Hall, at the National Theatre of Northern Greece, at the opening of art exhibitions, at festivals in Greece and abroad, in various museums, etc. He has collaborated with many great artists, singers, actors, painters and dancers such as: Psarantonis, Nikos Dimitratos, Agathonas, Mimis Plessas, Christodoulos Halaris, Ross Daly, Antonis Kafetzopoulos, Konstantinos Palian, Kostas Alexandridis etc.

In October 2020 he participated in the historical & visual exhibition "THE EVZONES" at the MUSEUM OF THE CITY OF ATHENS for the purposes of FERMELIS curated by Nikos Vatopoulos & Iris Kritikou. In December 2020 he began his collaboration with K.E.P.E.M where he presented the online performance "The carols" with the music and songs of Simon Karas. In February 2021 he painted for the International Day of the Greek Language for the Greek Consulate of Tunis. He has taught folk theatre and shadow theatre at the drama school of the National Theatre of Northern Greece and at private theatre schools.

His figures are hosted