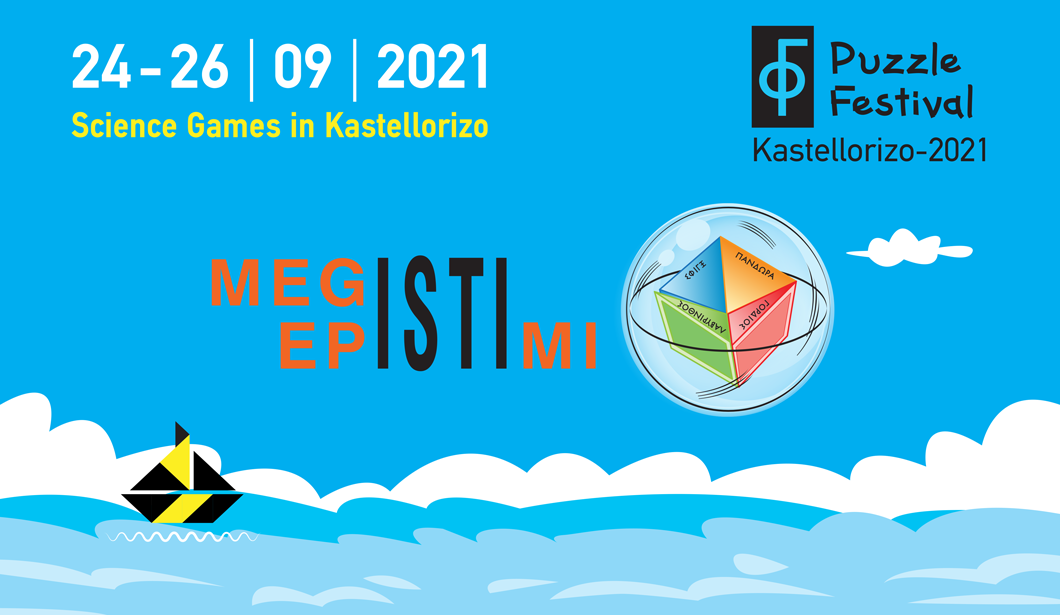 Τhe Kastellorizo Puzzle Festival, is a major scientific event, which will take place in September (24-26/9). It is a voluntary initiative of national importance, an event of  high scientific level, and above all, a great celebration of science, offering new knowledge and joy to the public of the island – of all ages and cognitive levels – and beyond.

We need to point out that the PF springs from Kastellorizo itself and is addressed to its residents and especially to its young audience. a major scientific event

But why is it called Puzzle Festival? It is because of the Megisti Puzzle Museum’s influence. Pantazis Houlis, is the  founder and owner of the Museum, which holds one of the largest puzzle collections in the world (many of which are his own inventions and constructions). He was a former professor at the University of Western Australia, and now a collaborator with the University of Crete (Summer School).

The idea belongs to Eleni Grammatikopoulou, known for her involvement to date in the field of science communication. She has participated in organizing major scientific events all over Greece always with great success. For this important work she has been awarded.

They have both successfully collaborated on two festivals in Athens and with great enthusiasm Pantazis accepted her proposal for the organization of this festival in Kastellorizo. He feels great honor and joy that such a large event (on an international scale) will take shape in his place of origin.

Distinguished scientists from various research institutions in the country will provide educational activities, guided tours, speeches, theatrical games, original events, interactive experiments, and many more. We believe that they will excite the public of all ages, who will follow them, and most importantly, will all participate actively.

The PF theme will focus mainly on:

The entire event is carried out by the Megisti Puzzle Museum and EN.I.G.MA (Union of Ideas, Puzzles, and Mathematics), under the aegis of the Ministry of Development/ General Secretariat for Research and Innovation. It is supported by the Ministry of National Defense

while there is a clear interest from the Municipality of Megisti and the Region of N. Aegean. In addition, the participation of the University of Crete, the Hellenic Pasteur Institute, EL.KE.THE, the Eugenides Foundation and other scientific/educational institutions has been ensured.

After all, the choice of date is not random. It is set at the end of September (24-26/9), when the schools will be open and the locals will not be too busy with tourism. Therefore, children and adults will enjoy it, and more importantly, will participate actively. More than 50 presenters of the Puzzle Festival have as their only motive their love for the communication of science and the provision of knowledge to the inhabitants – of all ages- of this remote island.