Storytelling by the writers themselves:

They will talk about their fairy tales related to the customs and traditions of Kastellorizo and with everyday simple scientific issues.

Michelle Kiosoglous will present her book “Kleio and Despina” with the customs, and tradition of Kastellorizo.

Christos Kalountzoglou and the pirate Mani Mani in Kastelorizo Island

Presentation of the fairy tale “The wet plank”

The pirate Mani Mani is one of us: a figure which you can meet at the Greek archipelago, fermented with salt and the savages. He walks among the rigging of his sailboat, climbs up to castles, travels to seas full of legends, knows the problems of the modern times. He is angry because the sea is threatened, because some people do not respect the port where I met him, the so called Trano Limani. So the takes action.

“The Adventures of Pirate Mani Mani” is an ecological tale for elementary school children and adults alike.

The Wet Board has been adapted as a theatrical play by the author, in order to ensure the participation of children in the presentation of the story. The interaction is achieved by assigning roles to the children, who play the heroes of the fairy tale. 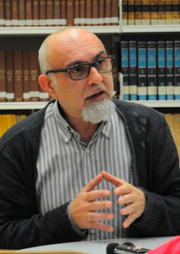 Christos Kalountzoglou was born 560 years ago in the most beautiful and well known port of the Greek archipelago, the so called Trano Limani.

From a young age he aimed to meet the famous explorer, named Sofronios Skourdouboutis. Luckily for him, growing up he met a muse, a fairy and a princess, who taught him to collect and save moments.

Later he met the pirate Mani Mani, who took him with him to the fairyland. There he was trained in difficult missions, such as freeing dreams from dream traps. In one of these missions he located the rarest animal of the archipelago - the turtle dove. Since then she accompanies him and helps him find the way, when he gets lost in the big village. He is only 560 years old and has time ahead of him for many trips with pirates and princesses.